Soil contamination with Cs-137 in Austria 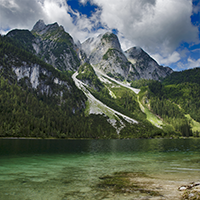 This summer we spent nice holiday week in Gosau, small alpine town laying at mountainside of Gosaukamm in a part of Austria known as Salzkammergut. It is very nice place with lot of natural attractions in surrounding area (mountains, lakes, caves, fossils, etc.). When we prepared for the holiday, I looked to the maps of Cs-137 contamination in Austria, since I've known, that there are some areas which were hit by highly contaminated air masses after Chernobyl NPP accident [1,2]. I found out, that the place where we should spend our holidays is also one of such Cs-137 hotspots (Image 1, place is marked with a circle). Surface activity of Cs-137 at this place reached level 60 - 80 kBq/m2 [2]. So the last day of our week in Gosau, I took about 0.5 kg of soil from small meadow in a town for a measurement.

I was really curious to compare Cs-137 contamination in the Czech Republic and Austria, so immediately upon arrival at home I dried my soil sample and prepared it for the measurement. The preparation of the soil sample was the same as described in previous article (Soil contamination with cesium-137 in the Czech Republic). After sieving the soil through a 0.5 mm mesh, 260 g of dry material was taken and gamma spectrum was collected for 39 hours.

For the clarity, how high is the contamination in this part of Austrian Alps, I made a graph (Image 2), where gamma spectra of soil samples from the Czech Republic are compared with the spectrum of the soil from Gosau.

Unlike the cases, when I measured Cs-137 contamination in the samples from our country, in this case, cesium photopeak was clearly visible after couple of minutes. I have known, that contamination in some parts of Austria is rather high, but I’ve been still surprised by Cs-137 peak height if compared with measurements, which I've done before.

So what is the conclusion from this experiment? I definitely would not eat anything like mushrooms, blueberries, game, etc. from this area, at least not in higher quantities.